Hochul is the ONE! 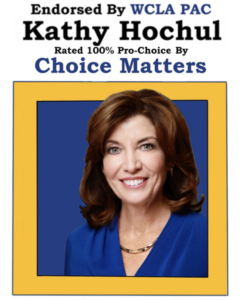 Hochul is the ONE!

“WCLA PAC is proud to endorse Kathy Hochul for Governor of New York State. At a time when the US Supreme Court is set to overturn Roe v. Wade and states across the country are banning abortion, New York needs a champion – and that’s Kathy Hochul. She is proving herself a leader of national proportion in the fight for reproductive justice for all. Hochul is committed to making New York a safe haven for all seeking abortion care.
A lifelong advocate of reproductive freedom, Hochul is the only pro-choice candidate in both the Democratic and Republican Primaries.
New York State voters have the opportunity to make history by making Kathy Hochul the first elected Woman Governor of the State of New York. It starts with electing her in the Democratic Primary on June 28th!”
–Catherine Lederer-Plaskett, WCLA-PAC
About Hochul
Kathy Courtney Hochul is a lifelong supporter of reproductive justice. She became governor of New York following Gov. Andrew Cuomo’s resignation in August 2021, and has committed herself to the reexamination and exposure of the culture of sexual harassment in Albany. Hochul was selected as Cuomo’s running mate in 2014. Before her election as lieutenant governor, Hochul won a special election for New York’s 26th Congressional District and served in the US House of Representatives, (2011 to 2013). She previously served as an Erie County Clerk, (2007 to 2011), at that time, the highest elected female official in Erie County; and as a member of the Hamburg Town Board, (1994 to 2007).